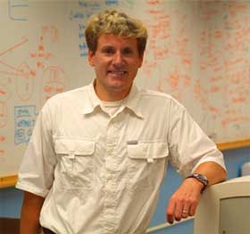 Stephen M. Black has had a lengthy career in the educational realm, and this career has included multiple administrative appointments. He was first appointed as the Laboratory Director for the Child Health Research Center at the University of California, San Francisco in 1997. Two years later, Stephen M. Black was chosen to be the Research Director for Northwestern University’s Division of Neonatology. He was appointed to Director of Vascular Biology for St. Patrick Hospital in 2003 and held this position until being appointed COBRE Group Leader for the University of Montana. His most recent appointments were as the Chief of the Program in Pulmonary Vascular Disease and Basic Science Director for the Cardiovascular Discovery Initiative, both with Georgia Regents University.


Learn more about Stephen M. Black by visiting his about.me profile here or by connecting with him on Bigsight: http://bigsight.org/stephen_m_black and Flavors.me: http://flavors.me/stephenmblack